This post was first published as part of Brittany’s Catalyst blogging residency, ‘The Two Review’ with fellow student Alexandra McManus. The Two Review offered a unique double review of all things Melbourne. Below, however are just Brittany’s parts of the post.

Summary: The Two seek to improve their limited (and rather embarrassing!) culinary skills. 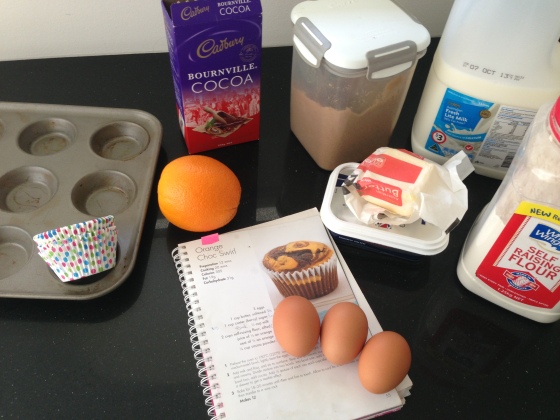 If you’ve followed us from the beginning, then you’ll know in our introductory post we both spoke about our poor culinary skills. We’re both great at tasting and eating food, but cooking it ourselves is less successful. We decided it was high time we rectified the situation. This week, we selected a recipe and endeavoured to follow it, resulting in what would hopefully be something delicious and most importantly, edible.

Both the easiness/clarity of the recipe and the finished product will be reviewed out of Masterchefs. Let the baking commence!

Brittany: A survey found that one in 20 British women couldn’t do the simple task of boiling an egg. I have been in that situation. I am ashamed. I actually had to ask my 13 year old sister (a masterchef extraordinaire) how to do it. She laughed in my face. So needless to say I’ve been quite keen on improving my cooking skills to avoid further embarrassment.  Instead of picking a fancy recipe and buying all new ingredients, I decided to try and cook something using ingredients already in my cupboard. It seemed like a good idea at the beginning, until I actually found a recipe I wanted to make.

With cupcakes being the latest ‘it’ thing to make, I thought they’d be a good starting point. I needed something simple that looked impressive, so when I found a recipe for orange and chocolate swirl cupcakes, I knew it was the one.

I didn’t quite have all the ingredients, so I experimented. No butter? Surely lurpak spread is the same thing! No caster sugar? How different can muscavado sugar taste? When all the ingredients were artfully laid out on the table, I was ready to start.

The recipe said prep time was 12 minutes and cooking time 20 minutes. Twelve minutes into the process, I’d managed to create a wonderful cooking music playlist and line the tray with paper cases. It was going well. With my Australian flag apron and chef hat (for a bit of added professional confidence) I was feeling good.

I softened the ‘butter’, ‘sugar’ and eggs until they were what the recipe described as ‘light and fluffy’. There was nothing that resembled fluffy clouds in my bowl – only brown sludge.

After adding the milk and flour, the mixture looked good, like some kind of caramelly biscuit dough. If that’s what I was making, I’d be pretty happy. But I wasn’t.

I then had to whisk the mixture for two minutes with the electric mixer. I plugged it in, switched it on and…nothing happened. The mixture was too thick for the whisk to even work. Feeling a little desperate, I added more and more milk until the whisk finally (and slowly) started moving.

I managed to complete the final few steps with minimal trouble – separating the mixture into two bowls of the chocolate and orange mixes, before swirling both in the cupcake cases.

With the cupcakes finally in the oven (an hour after I started) I was feeling pretty confident. Too confident. I decided to try my hand at making a choc orange icing. Throwing in the icing sugar and water willy nilly resulted in a thin gross gloop that neither looked nor tasted good. So much for my improved cooking skills!

After 20 minutes, the cupcakes were ready and actually looked pretty good! They carried a fragrant smell of orange and I couldn’t resist trying one warm out of the oven. The sugar hadn’t made any difference to the taste, but using the proper butter would probably have made it moister. Three cupcakes later (I had to taste test a few of course) and I was feeling pretty chuffed with myself. Despite a few (major) hiccups the cupcakes looked good and are most importantly edible. In fact, more than edible! Seems I’ve struck upon an almost foolproof recipe. Nigella, eat your heart out.

Skill: 2/5 Masterchefs – my skills are lacking, but the recipe was straightforward and easy to follow.

Aesthetics: 3.5/5 Masterchefs – the cupcakes look enticing! Some icing/decoration may have made them look more impressive though.

Taste: 3.5/5 Masterchefs – I’m surprised that they actually taste alright. The orange/chocolate contrast is nice, although I’d probably add more orange zest next time to amp up the flavour.